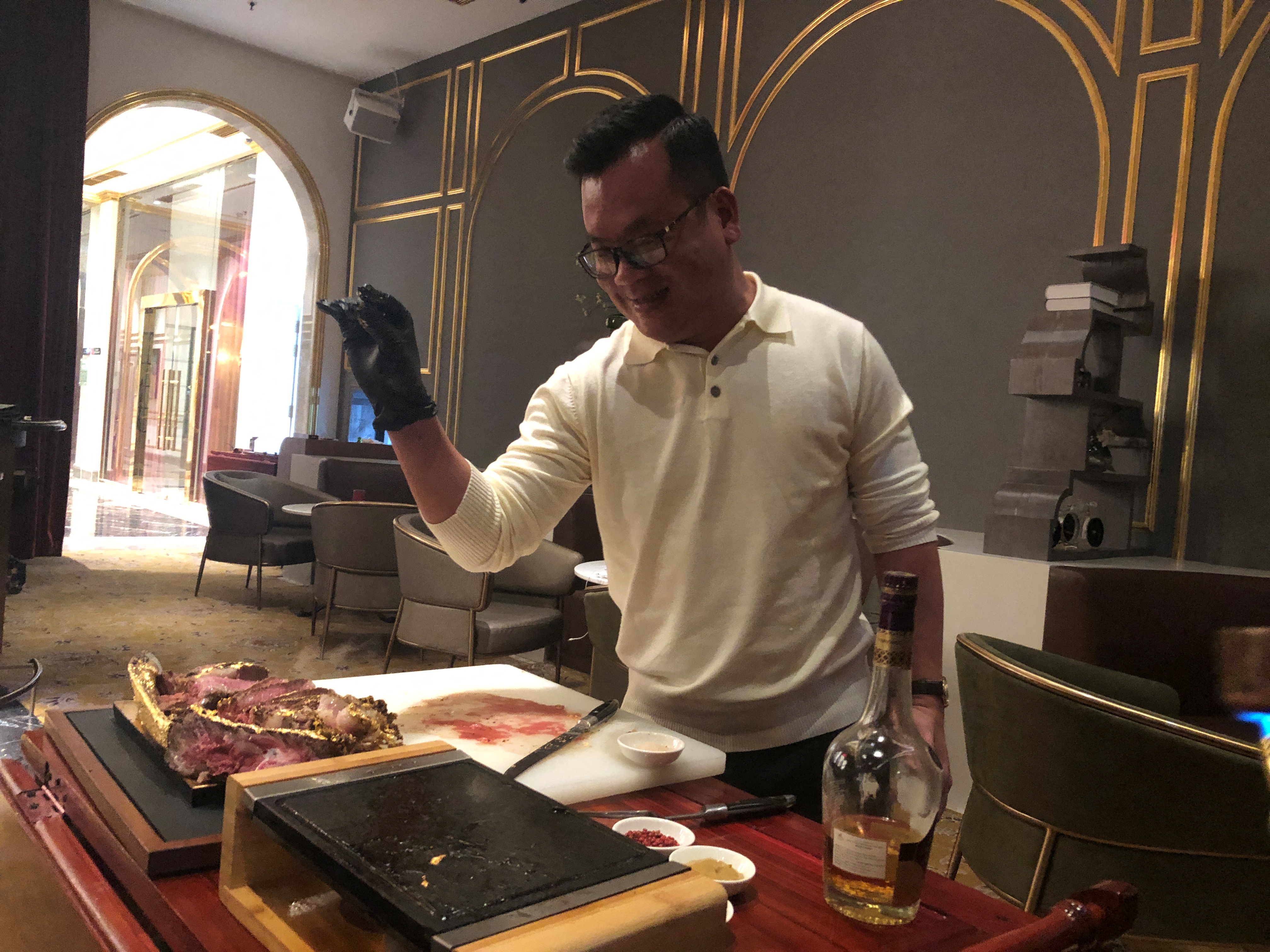 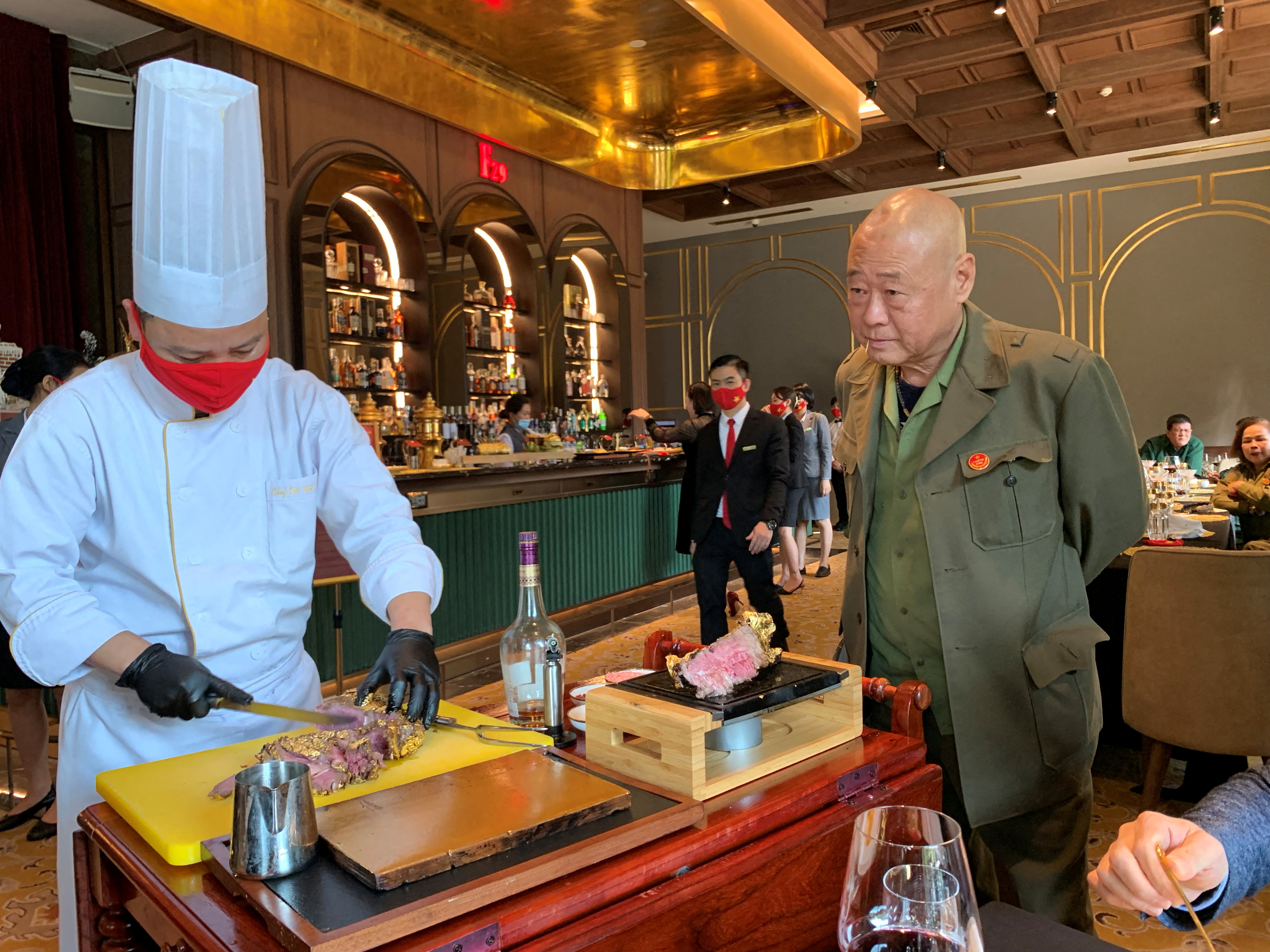 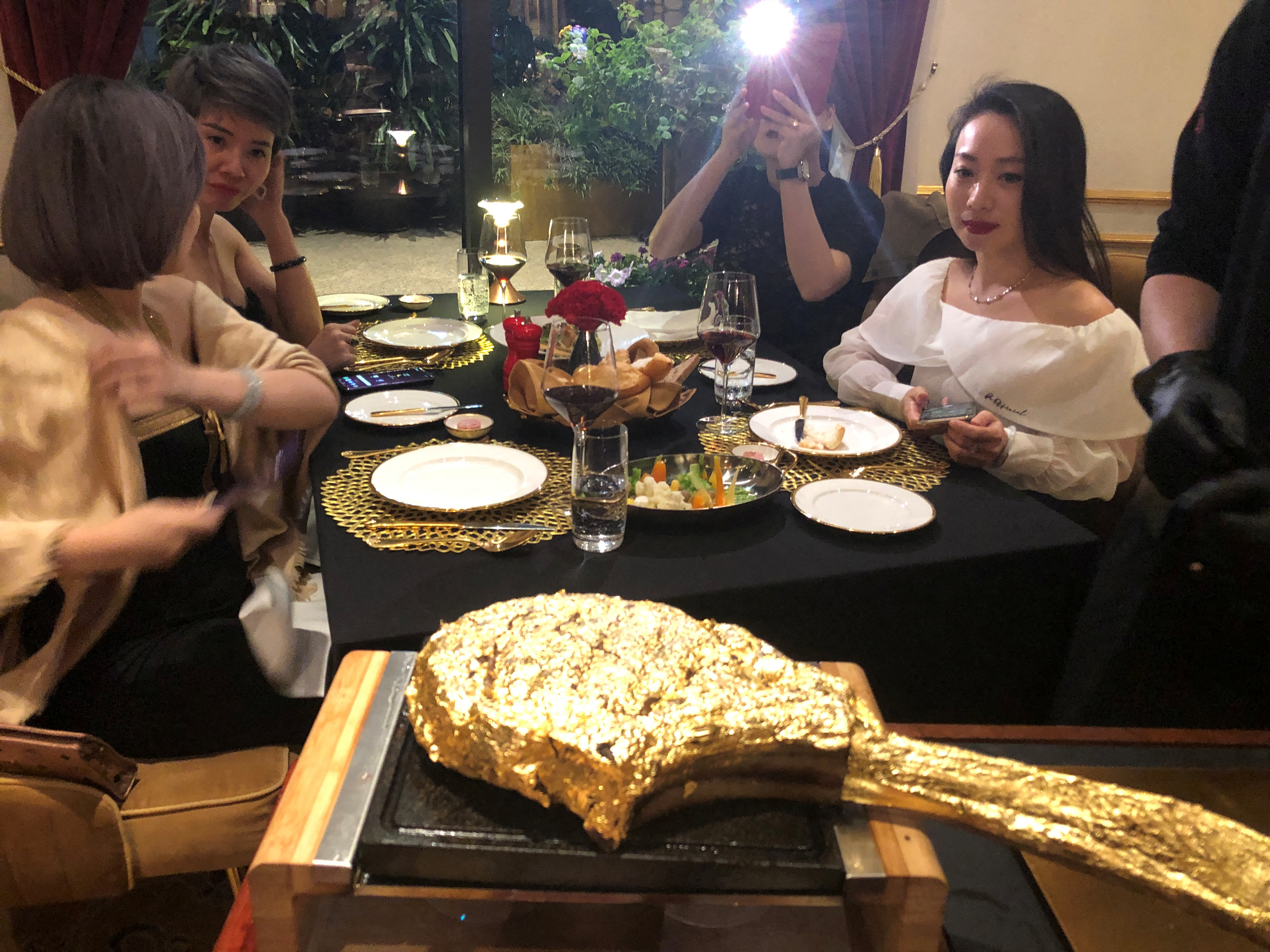 A chef serves a gold leaf-coated steak to a Vietnam War veteran, tapping in on a wave of publicity after a government minister was caught on camera being fed the dish at a London restaurant, at a Dolce By Wyndham Hanoi Golden Lake hotel, in Hanoi, Vietnam December 4, 2021. Picture taken December 4, 2021. REUTERS/Minh Nguyen

HANOI, Dec 10 (Reuters) - A Vietnamese hotel is offering diners the chance to try gold leaf-coated steaks, seeking to tap a wave of publicity after a government minister was caught on camera being fed the dish at a London restaurant, where steaks can cost over 1,000 pounds.

The Dolce Hanoi Golden Lake Hotel had a makeover last year using a tonne of the metal to gold-plate everything from bath tubs to toilets, all housed behind a gold exterior.

Now as part of a rebranding, the hotel has renamed one of its eating outlets the Golden Beef Restaurant and put the famed gold-encrusted "Tomahawk Wagyu" steak the Vietnamese minister ate in London on the menu, charging from around $45 a person.

"We have served more than 1,000 guests who came to try out the golden steak," said Nguyen Huu Duong, chairman of Hoa Binh Group, which owns the hotel managed by U.S.-based Wyndham Hotels & Resorts Inc (WH.N).

Turkish celebrity chef Nusret Gokce, or "Salt Bae", uploaded a video of himself last month feeding Minister of Public Security To Lam the gold-leaf encrusted Tomahawk steak, causing a stir in Vietnam. Steaks at Gokce's restaurant sell for up to 1,450 pounds ($1,914).

Many in the Southeast Asian country questioned how such a high-ranking Communist Party official allowed himself to be filmed indulging in such expensive food amid a state crackdown on corruption. Vietnamese officials have not commented on the incident.

There was further publicity after Vietnam police summoned a beef noodle seller who filmed himself imitating Gokce's flamboyant style. Police in Vietnam routinely summon activists and people publicly critical of the ruling Communist Party for questioning. The man denied he was trying to mock anyone.

Even though the hotel had already been serving gold steaks, the recent publicity inspired the restaurant's rebranding, said Duong, a Vietnam War veteran and former cyclo taxi driver who made his fortune in construction and property.

The restaurant imports its gold leaves and uses about 10-15 on each Tomahawk steak, which serves four people.

"I thought why don't I open a restaurant that sells golden steaks that are affordable," said Duong.

The dish remains out of reach for many, however, with average monthly income in Vietnam reaching around $183 per month last year.

Still, diners at the restaurant this week appeared to feel they were getting their money's worth.

"This is one of the most memorable experiences of my life," said first-time customer Pham Duy Bach, 40.