Made in the Philippines

Made in the Philippines

Nguyen Huu Duong is the kind of person a country like ours should have.  According to a Reuters story, this soldier-turned-tycoon is a fierce patriot still fighting to protect his country, four decades after battling American forces in the Vietnam War.

Reuters reports Duong has amassed a war chest of tens of millions of dollars in construction and he is using that money to fight for greater independence for Vietnam’s economy. He is fighting to counter an invasion of Chinese goods.

This rags-to-riches entrepreneur says the Vietnamese economy is suffocated by a multi-billion dollar influx of cheap, mass-produced goods from China, under-cutting domestically produced items. So he launched his rescue plan which he says isn’t a swipe at China.

Duong is nurturing startups, enticing them with free 50-year leases in his Hanoi mall “V+” – if they sell only Vietnamese-made products. He is calling on his government to introduce the model nationwide to stem the closures of tens of thousands of businesses each year and encourage customers to go local.

“China exports to the world at very, very low prices and that’s put huge pressure on the Vietnamese economy and production,” Duong told Reuters. “I’m a businessman, I understand why firms can’t develop. Without this kind of thing, Vietnamese businesses will perish.”

Wow! Such a heartwarming story! It explains why Vietnam managed to defeat a world power in a protracted and cruel war. Such patriotism or love of country is hard to find in our own country, specially among our economic elite.

My gut feel tells me this may prove to be more of a symbolic gesture than anything else, but heaven knows we need such symbolic gestures to strengthen our sense of nationhood. I wonder, if we challenged our Chinoy brothers and sisters who run the biggest malls in this country, can they muster the patriotism of Duong and do something like it?

I know. It is like the Man from La Mancha battling the windmills. How can we really fight made in China? Our cell phones may have an American brand but is made in China. Maybe that’s difficult to do in terms of electronics. Let us stick to garments.

Once upon a time we had a thriving garments manufacturing industry. We produced textiles and manufactured ready to wear garments. Despite heavy protectionist policies, we lost both. I have had conversations with Peter Tanchi and Johnny Litton on what happened. Their stories are enough to make anyone think reviving these industries is mission impossible.

But I also once heard a presentation of Bernadette Siy of the Garments Exporters Confederation and it seems there is a glimmer of hope. We have lost the commodity side of the garments industry, but we still have a share of the up-market brands.

The impression I got from Ms. Sity is that our fundamentals (among others labor cost) make it difficult to compete against China or Bangladesh, but we have better quality production skills and a flair for design. The up-market brands can afford our higher labor costs. But she still thinks we have to do a lot more to compete in the international garments market.

I heard that presentation over three years ago during a meeting of the Foundation for Economic Freedom. In that same forum, I also heard Dr. Gerry Sicat (who is a fellow columnist in this paper) propose special economic zones where our more stringent labor laws can be relaxed to provide more employment in the poverty stricken provinces. Job creation should be top priority for both our public and private sectors.

I like that idea. Chronic unemployment and poverty in some of our provinces can be addressed by a concept like this. I think it deserves to be tested in an island province like Masbate or Guimaras, for instance. Let us see how it works over time.

We lose nothing by trying. A large number of people are unemployed there and most likely, always will be. The prospect of earning something and mastering a useful skill is an absolute plus.

Then let us work on our mall-owning taipans to help produce the orders. The SM Group comes to mind, not only because they are the largest, but also because they are linked to such brands as Uniqlo and Forever 21. Since the Sy family knows what it takes to grow a business from humble beginnings, they are in the best position to help budding entrepreneurs now.

I know Uniqlo made some noises about manufacturing here, but nothing much came out of that press release. Perhaps, there are things in our environment that makes manufacturing here too much of a hassle. They already have a humming supply chain and they only want to think of us as a market to make money out of.

That’s where the savvy, and perhaps the patriotism, of the SM Group come into the picture. I know if Tessie Coson sets her mind on something, she gets it done. She can work with Bern Siy, another strong willed woman. I am sure the two can produce something good for the country.

Perhaps give the small local garments manufacturers really good financial deals. Or help the locals improve their design and quality so local consumers will patronize them.

Then there are the local brands like Bench. I like it that Bench has an on-going marketing campaign that urges consumers to Go Local. If there is one garments manufacturer who can do it, it is Ben Chan, the youngest brother of Oishi taipan Carlos Chan.

I remember I once wrote a column that chided Bench for manufacturing in India. I bought this really nice shirt from Bench but was surprised to find out it was made in India. I understand it is cheaper to do that there. But a Filipino brand should be more than just a marketing handle. Bench must be Filipino through and through.

The garments industry is the best test case because it can create a lot of jobs right away. China started its big economic leap forward with garments too. I have bought Mexican guayabera shirts from Walmart that’s made in China.

The other thing with garments is that we have very talented designers. That’s a high value added component in a successful garments industry. It may shock Stella Marquez Araneta, but we do have world class fashion designers here. There are at least two or maybe three of them making waves in Hollywood now.

Perhaps this Vietnamese mogul is being too radical by giving free mall space to anyone who would sell only made in Vietnam goods. But the concept of helping ourselves, helping our industries get on their feet can be done our own way.

I know we cannot ban the entry of made in China goods, the world trading system being what it is today. But just add some patriotism to good old capitalist thinking and we just might get good results.

Protectionism no longer works. But government bureaucrats must be innovative too and be brave to change old rules on labor, among others, to achieve better results. 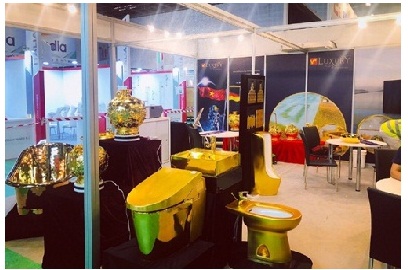 The Big 5 Fair came to an end few months ago and still we have been overwhelmed by the success of Hoa Binh Group’ stand at the fair where our exclusive brand V+ Luxury featuring our 24-carat gold-plated products were introduced. 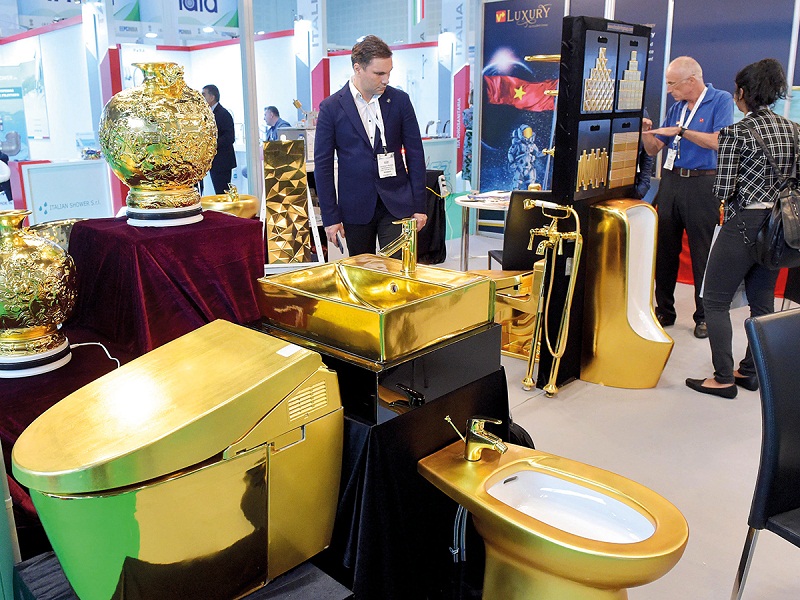 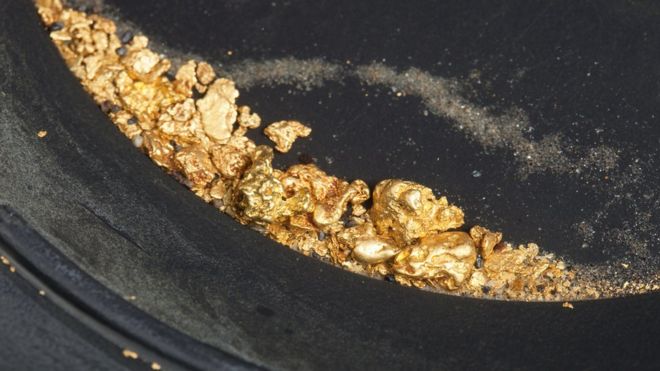 Gold could be used in cancer treatment

Tiny flecks of gold could be used in the fight against cancer, new research has suggested. 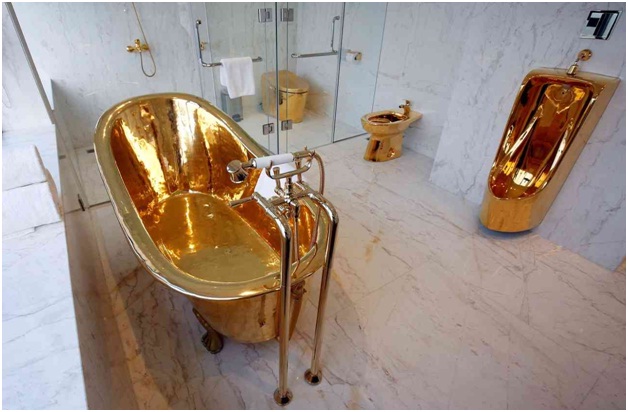 A hotel suite with a bathtub made of gold

Pleasures only the rich can afford — A hotel suite with a bathtub made of gold! Find out where 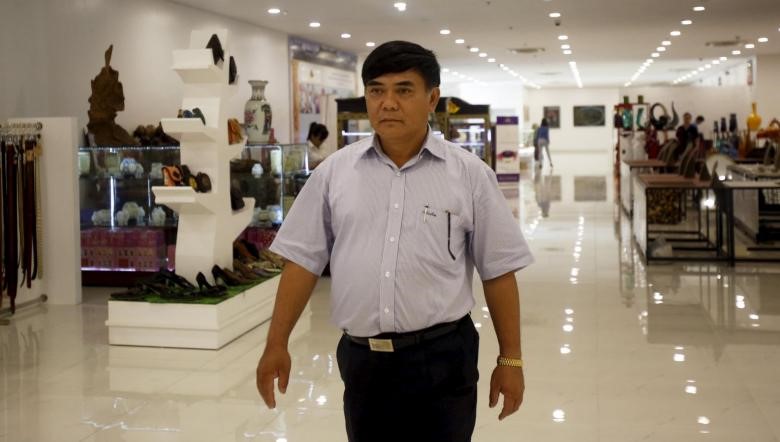 Tycoon to the rescue as cheaper China floods Vietnam's economy 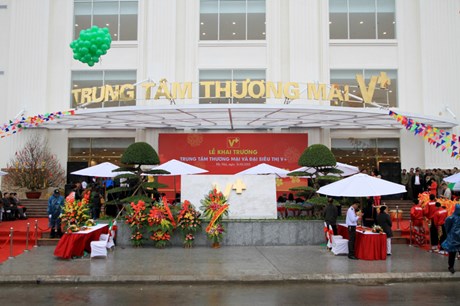 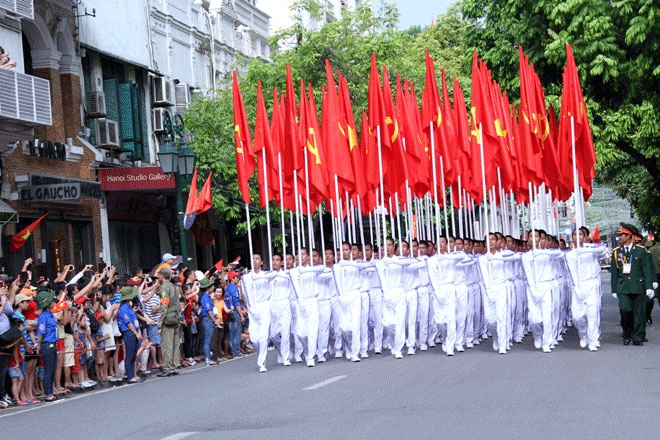 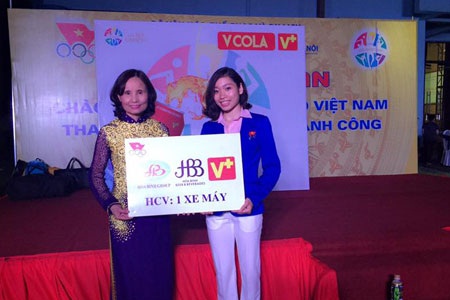